The Colour of Magic – Review 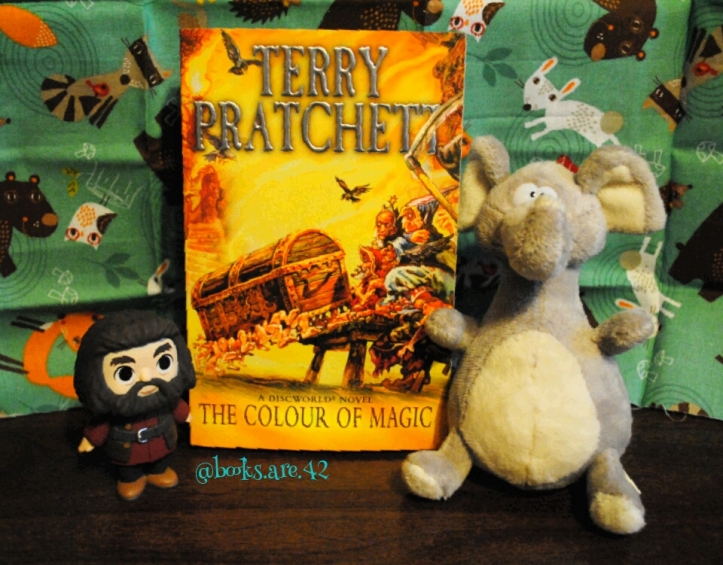 The first Discworld novel is The Colour of Magic and the description on the back of the book says “Somewhere on the frontier between thought and reality exists the Discworld, a parallel time and place which might sound and smell very much like our own, but which looks completely different. Particularly as it’s carried through space on the back of a giant turtle (sex unknown). It plays by different rules. But then, some things are the same everywhere. The Disc’s very existence is about to be threatened by a strange new blight: the world’s first tourist, upon whose survival rests the peace and prosperity of the land. Unfortunately, the person charged with maintaining that survival in the face of robbers, mercenaries and well, Death, is a spectacularly inept wizard…”

This is the part where I should throw in a disclaimer warning people that Terry Pratchett isn’t for everyone. The Discworld is a fantasy universe and The Colour of Magic is full of wizards, and dragons that only exist if you believe, and a feisty chest that isn’t afraid to eat people. The humour in this book also isn’t for everyone, it’s a clever, subtle kind of humour that can easily be missed. However, if you’re the type of person who enjoys books about wizards and magic and you appreciate this kind of humour, this book is for you.

The characters in this book are pretty interesting. There’s Rincewind, a failed wizard who is constantly running away from things. There’s Twoflower, a tourist who is super curious and excited about everything (especially dangerous things). And there’s The Luggage, who is fiercely devoted to its owner and follows him wherever he goes.

Personally, I’m a big fan of Rincewind because he keeps on finding himself in these situations where he’s forced to be heroic even though he’s totally unprepared for it. I’m also a fan of Death and I hope to read some of the Discworld books where he’s the main character.

That brings me to one of the neat things about the Discworld universe; you don’t necessarily have to read all the Discworld novels in order since each book its own story even though they all take place in the same universe. Of course, there are some advantages to reading the books in order because there are some larger story arcs, but they don’t have to be read in order. Personally, I plan on reading The Light Fantastic, the second book, next and after that, I might skip ahead and read Mort, the first book that features Death as the main character.

I gave The Light Fantastic three stars on Goodreads. This isn’t because I didn’t enjoy it, it’s because it took me a little while to get into and to appreciate the characters and the universe. However, I did like the book enough that I went out and bought the second book, which I plan to read sometime in the near future. If you’re a fan of fantasy and clever humour, I definitely recommend giving the Discworld series a try.