I decided to pick up Felicia Day’s You’re Never Weird on the Internet (Almost) because I have a thing for memoirs written by funny women. I know it sounds a bit strange, but it’s the truth. I’ve read Tina Fey’s Bossypants, Amy Poehler’s Yes Please, and Furiously Happy and Let’s Pretend This Never Happened by Jenny Lawson. I’ve also read Why Not Me? and Is Everyone Hanging Out Without Me? by Mindy Kaling even though I’m not that familiar with her work. My point is, I have a thing for memoirs written by funny women and even though the only thing I knew about Felicia Day before adding this book to my cart was that she was a funny woman, I decided to buy it anyway. 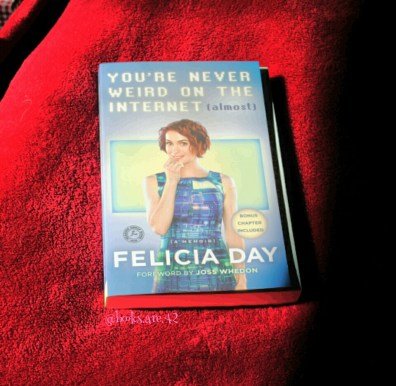 The description on the back of the book says “When Felicia Day was a girl, all she wanted was to connect with other kids (desperately). Growing up in the South, where she was “home-schooled for hippie reasons,” she looked online to find her tribe. The internet was in its infancy, and Felicia became an early adopter at every stage of its growth—finding joy and unlikely friendships online. Her relative isolation meant that she cold pursue passions like gaming, calculus, and 1930s detective novels without shame. Because she had no idea how “uncool” she really was.

Yet if it hadn’t been for her strange background, Felicia might never have had the naïve confidence to forge her own path. She graduated as valedictorian with degrees in math and music but decided to pursue acting in Hollywood. After finding herself typecast on TV, she created her own web series before anyone knew online videos could be more than just cats chasing laser pointers. Ever candid, Felicia opens up about the rough patches along the way, recounting battles with writer’s block, a full-blown gaming addiction, severe anxiety, and depression—and how she reinvented herself when overachieving became overwhelming.”

When I started this book, I wasn’t sure why I was reading it. During the first few chapters, she talks a lot about online gaming and this is an area that I’m not that familiar with. Fortunately, I found the story about Felicia’s mom driving her up to New Jersey to meet her online friends in real life to be amusing and I kept on reading. I’m really glad that I didn’t give up on this book after the first few chapters because this book is about more than gaming and being a geek, it’s about embracing your passions and following your dreams.

You’re Never Weird on the Internet (Almost) is about how working hard and being stubborn can help you achieve your goals. This book is full of stories about how Felicia Day kept on pushing forward to achieve her goals, even though people were telling her to give up. She pushed forward even when the voice inside of her head was telling her that she couldn’t do it and that she should just give up. I feel like that’s one of the important lessons in this book, that you shouldn’t listen to that voice inside of your head that tells you that you can’t do it; that voice is mean and more importantly, it’s wrong. Felicia Day tells her readers that you can do it, your dreams can come true, you just have to keep pushing forward and not let the voice inside of your head get you down.

One of the other reasons I liked this book is because Felicia Day is a great role model for women everywhere. She’s pushed forward in areas that seem to be dominated by men, she’s a gamer with a math degree. She shows women that they should chase their dreams and that there’s nothing wrong with loving what you love and embracing your passions. Felicia Day loved math as a kid, so she earned a math degree. She loves online gaming and she tells her readers about how she spent countless hours engulfed in World of Warcraft. She decided that she wanted to turn her experiences playing online games into a show, so after months of struggling to write a TV pilot, she wrote the first episode of The Guild. And when TV producers didn’t understand her show and rejected her, her friends encouraged her to create a web series and then The Guild was born. Felicia Day shows people, especially women, that they can do anything and that they should like what they want to like, despite what anyone tells them.

Overall, I give this book 3.5 out of 5 stars. I enjoyed it and I found it to be funny and this book makes me want to go check out The Guild, even though I probably won’t understand it. Unfortunately, I had a bit of a difficult time getting through some sections, especially the parts that talked a lot about gaming and the Internet. I think that this is a book you should read if you’re looking for inspiration to keep on going and chase your dreams, it’s also a great book for anyone who is a fan of Felicia Day (obviously).