This weekend I went to Chapters and decided to finally pick up Norse Mythology by Neil Gaiman. When I got home, I started to flip through it and I was immediately intrigued by the stories that Gaiman was telling. In this book, Gaiman tells the stories of Norse Mythology in a way that makes the book a quick and enjoyable read that is difficult to put down. 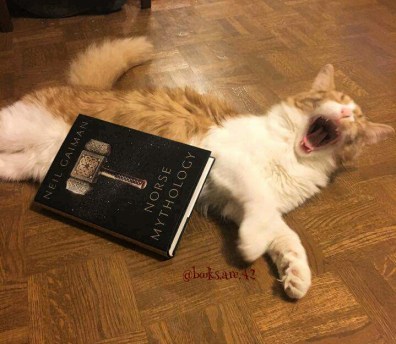 The description on the jacket says: “Neil Gaiman has long been inspired by ancient mythology in creating the fantastical realms of his fiction. Now he turns his attention back to the source, presenting a bravura rendition of the great northern tales.

In Norse Mythology, Gaiman stays true to the myths in envisioning the major Norse pantheon: Odin, the highest of the high, wise, daring, and cunning; Thor, Odin’s son, incredibly strong yet not the wisest of gods; and Loki—son of a giant—blood brother to Odin and a trickster and unsurpassable manipulator.

Gaiman fashions these primeval stories into a novelistic arc that begins with the genesis of the legendary nine worlds and delves into the exploits of deities, dwarfs, and giants. Once, when Thor’s hammer is stolen, Thor must disguise himself as a woman—difficult with his beard and huge appetite—to steal it back. More poignant is the tale in which the blood of Kvasir—the most sagacious of gods—is turned into a mead that infuses drinkers with poetry. The work culminates in Ragnarok, the twilight of the gods and rebirth of a new time and people.

Through Gaiman’s deft and witty prose emerge these gods with their fiercely competitive natures, their susceptibility to being duped and to duping others, and their tendency to let passion ignite their action, making these long-ago myths breathe pungent life again.”

One of the things that I enjoyed about this book is that you don’t need to have any prior knowledge of Norse mythology to understand what’s going on. This book starts off by introducing the reader to Odin, Thor, and Loki. It goes on to tell the story of the creation of the nine worlds, how certain gods and goddesses came to exist, and how other key items in Norse mythology came to exist. The book ends with the story of Ragnarok, which includes a battle and the creation of a new world.

This book was a bit different from what I’m used to reading. It almost reminded me of something that could be required reading for a classics course in University because it covers the mythology from the beginning to the end. Fortunately, this book is a lot more readable than most things I had to read in University and it was easy to get through. Gaiman’s style of writing makes this book entertaining and difficult to put down and the relative shortness of the stories leads to the issue of wanting to read just one more story.

This book is a good introduction to Norse mythology and it provides the reader with enough information to allow them to go out and learn more about Norse mythology. It’s a good choice for anyone who is interested in mythology but doesn’t know where to start.

The other neat thing about reading these stories is that they provide insight into the origin or inspiration for other stories. Mythology has been around for a long time and a lot of the stories have been adapted into or inspired other stories. For example, American Gods by Neil Gaiman features characters from Norse mythology and Finrir Greyback from the Harry Potter universe comes from Norse mythology.

Overall, I really enjoyed this book. It didn’t take me very long to get through and each story left me wanting to read the next one. I liked that the book started with an introduction of some of the gods and that it seemed to continue in a chronological order. I also really liked that this book was an introduction to Norse mythology and that it explained things as it went along. Personally, I’m a fan of Loki and I appreciated his trickery and his schemes and I found the entire book to be entertaining and enjoyable.