I can’t believe it’s already April and that it’s time to do my March wrap up post!

This month I acquired seven new books, which is a lot of books. I got:

This month was unusual because the majority of the books I bought were YA books. I have mixed feelings about YA books and I usually get incredibly frustrated with them, but this month I added four to the collection. I added Finding Audrey because one of my best friends who knows what I like to read recommended it; and Caraval, Throne of Glass, and A Court of Thorns and Roses were added because the bookstagram community seems to love them!

This month I finished five books, they were: 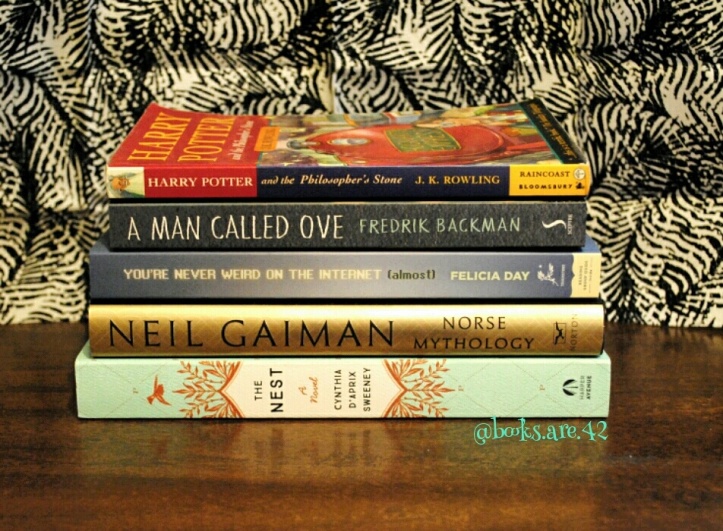 For the most part, I really enjoyed the books I read in March. Harry Potter was a reread, but it was really nice to pick it up and go back to Hogwarts. A Man Called Ove was absolutely amazing and it’s jumped onto my recommendation list for people who like contemporary books and cats. I enjoyed The Nest because it felt like I was reading a soap opera and I love The Young and the Restless. I also really enjoyed reading Norse Mythology because Neil Gaiman is such an amazing storyteller!

I didn’t read as much as I thought I would this month because near the middle of the month I hit a bit of a reading slump. I’m hoping that in April I’ll be able to read at least another five books and that I can post at least twice a week on my blog. Speaking of which, I’m going to start to write more than just reviews on my blog this month!

Speaking of which, I’m going to start to write more than just reviews on my blog this month! When I started this blog, I knew that only writing reviews wouldn’t be enough to keep my blog going and now I’ve done some brainstorming and I’ve decided that I’m going to add posts like quote posts, recommendation posts, bookish thought posts, and weekly wrap-ups! I’m also going to try to get a few people to write some guest posts. Fingers crossed that this all goes well!