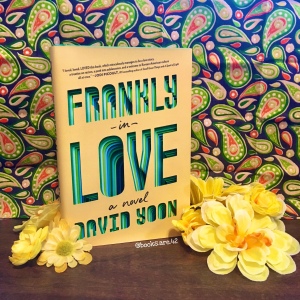 Summary: From Goodreads: “High school senior Frank Li is a Limbo–his term for Korean-American kids who find themselves caught between their parents’ traditional expectations and their own Southern California upbringing. His parents have one rule when it comes to romance–“Date Korean”–which proves complicated when Frank falls for Brit Means, who is smart, beautiful–and white. Fellow Limbo Joy Song is in a similar predicament, and so they make a pact: they’ll pretend to date each other in order to gain their freedom. Frank thinks it’s the perfect plan, but in the end, Frank and Joy’s fake-dating maneuver leaves him wondering if he ever really understood love–or himself–at all.”

Review: I purchased this book shortly after it was released last year, and I was looking forward to reading it because of all the hype surrounding it. People seemed to be enjoying it, and the book itself is gorgeous, especially with its blue painted edges. I finally got around to reading it this month, and frankly, I was disappointed with it.

Frankly in Love follows Frank Li, a Korean-American teenager who is struggling to deal with his parent’s expectations and their racism. He hates that they believe all the negative stereotypes about other races and that they constantly spout these stereotypes off as facts. He also hates the pressure that this puts on him to fall in love with someone who is Korean, especially when he starts dating Brit Means, who isn’t Korean.

Frank has been friends with Joy Song since they were children. She understands the pressure that Frank feels because her parents have the same expectations for her. It also doesn’t help that Joy is in love with Wu, someone who also isn’t Korean. Neither of them can tell their parents who they’re dating because they don’t want to get disowned from their family like Frank’s sister. They also can’t keep on coming up with excuses about where they’re going when they’re sneaking out to go on dates. Then, one night when their parents decide to play matchmaker, Frank and Joy decide to start fake dating and it provides them with the perfect alibi to carry on with their real relationships. Unsurprisingly, things start to get complicated between them.

My favourite thing about this book was all the discussions about race and racism. I think that the diverse cast of characters in this book allowed for some powerful moments and discussions that stand out. I especially loved the discussions that Frank had with his best friend, Q, because they both contributed different perspectives to the conversation. I also enjoyed it when Frank tried to challenge his parents on their racist views, even if the discussion didn’t go very far.

One of the reasons why I found this book to be disappointing is because I was expecting a cute rom-com, and instead, I got something a lot more complicated. I was expecting a cute fake-dating rom-com that would leave me with heart-eyes and a new OTP, but instead, this was a book about a teenager dealing with a lot of teenage problems. There isn’t necessarily anything wrong with this, but unfortunately, I find it difficult to relate to these problems, especially when they’re relationship related.

As far as the characters go, I didn’t dislike any of them, but there were very few that I really liked. Frank was an okay main character, his inner thoughts were frustrating, but he did make a The Hitchhiker’s Guide to the Galaxy reference, which is something I will always appreciate. However, I thought he was a jerk to most of the female characters and I felt that the constant mention that Q’s sister was “hot” was entirely unnecessary. My favourite character was Q, and I wish he could have been in the book more. I thought he was a loyal friend, especially considering everything that was going on in his personal life. I wish that his sexuality would have come up sooner, and I hope the reason why it was brought up so late is that the author is planning on releasing a second book told from Q’s perspective.

Overall, even though I was disappointed by this book, it was an enjoyable enough read. I don’t regret reading it, and I’ll probably read the second book if it’s about Q. I also think that I would have been less disappointed if I knew that this book wasn’t a rom-com when I picked it up.