ARC Review – Of Curses and Kisses by Sandhya Menon

Title: Of Curses and Kisses 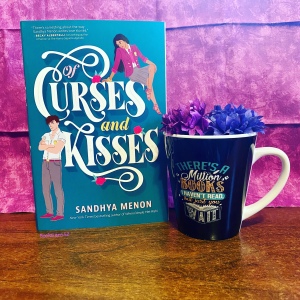 Summary: From Goodreads: “Will the princess save the beast?

For Princess Jaya Rao, nothing is more important than family. When the loathsome Emerson clan steps up their centuries-old feud to target Jaya’s little sister, nothing will keep Jaya from exacting her revenge. Then Jaya finds out she’ll be attending the same elite boarding school as Grey Emerson, and it feels like the opportunity of a lifetime. She knows what she must do: Make Grey fall in love with her and break his heart. But much to Jaya’s annoyance, Grey’s brooding demeanor and lupine blue eyes have drawn her in. There’s simply no way she and her sworn enemy could find their fairy-tale ending…right?

His Lordship Grey Emerson is a misanthrope. Thanks to an ancient curse by a Rao matriarch, Grey knows he’s doomed once he turns eighteen. Sequestered away in the mountains at St. Rosetta’s International Academy, he’s lived an isolated existence—until Jaya Rao bursts into his life, but he can’t shake the feeling that she’s hiding something. Something that might just have to do with the rose-shaped ruby pendant around her neck…

As the stars conspire to keep them apart, Jaya and Grey grapple with questions of love, loyalty, and whether it’s possible to write your own happy ending.”

Review: I received an advanced copy of this book from the publisher, Simon Pulse, and Net Galley in exchange for an honest review.

Of Curses and Kisses is a Beauty and the Beast retelling that follow Princess Jaya Rao and Lord Grey Emerson as they attend St. Rosetta’s Academy together. Jaya follows her sister, Isha, to St. Rosetta’s Academy after the media attacks Isha for behaviour that is unbecoming for a princess. Jaya could have finished her senior year elsewhere, but a source told her that the story was leaked to the media by an Emerson, and Jaya wants revenge. Princess Jaya and Grey Emerson have never met before, but their families have been enemies for generations, and legend has it that the Raos placed a curse on the Emersons that is still plaguing them to this day.

This book was a lot of fun to read. Beauty and the Beast is one of my favourite fairy tales, and I loved that this was a contemporary retelling of it, with just a hint of magic in it. I know that there have been a ton of Beauty and the Beast retellings in recent years, but a lot of them have been fantasy, and as someone who struggles with fantasy books, I really appreciated this contemporary story. This book was predictable to a certain extent because it is a retelling, but I really enjoyed what this book did with this tale as old as time.

My favourite thing about this book was the strong female characters. Jaya is smart, strong, independent, caring, and protective. Throughout the book, she’s coming up with unique solutions to problems, and she goes out of her way to help people. I loved Isha’s passion for robotics and engineering, and I loved that she was able to talk some sense into Jaya near the end of the book. I liked the relationship between Jaya and Isha, and I enjoyed the scenes where they got into it over their actions and what was expected of them as royals.

I liked the friendship between Daphne and Jaya, and I liked that the reader was able to see Daphne’s struggle with following her heart or her head when it came to her relationship struggles. I liked Catarina, even though she was a bit of a villain and pretty terrible at times. I appreciated reading about her internal struggle and trying to keep a calm front while everything was falling apart around her. I also liked that Jaya kept on extending olive branches to her, even though she didn’t really deserve it.

Grey Emerson is a character who I just want to wrap up in a blanket and hand a hot cup of tea to while telling him that everything is okay. I can’t even begin to imagine how lonely he must have been, especially with how his father treated him. I loved watching him slowly blossom as he grew closer with Jaya, and I spent the whole book rooting for him to get through all the problems his father put him through. Grey and Jaya are definitely OTP material, and I like imagining them taking on the world together after they graduate from St. Rosetta’s Academy.

The other thing that I liked about this book is how many villainous characters there were and how there were different villains in each storyline. Alaric made me want to scream because he was such a jerk, especially to Daphne and Catarina. Grey’s father was frustrating because he was such a coward and so dismissive of his son. Finally, every time Kiran Hedge was mentioned, I thought of Gaston and I’d start singing “no one fights like Gaston” to myself.

Overall, I thought this book was fantastic. The characters were brilliant, and I loved the dynamics between them. I thought the romance was super cute, and I was rooting for Jaya and Grey the whole time. I liked that this book had a magical element in it, but that it was still a contemporary story that takes place in the real world. This is supposed to be the first book in a trilogy, and I can’t wait for the second book to be announced and released.