Summary: From Goodreads: “The Home for Unwanted Girls meets Orphan Train in this unforgettable novel about a young girl caught in a scheme to rid England’s streets of destitute children, and the lengths she will go to find her way home—based on the true story of the British Home Children.

At ninety-seven years old, Winnifred Ellis knows she doesn’t have much time left, and it is almost a relief to realize that once she is gone, the truth about her shameful past will die with her. But when her great-grandson Jamie, the spitting image of her dear late husband, asks about his family tree, Winnifred can’t lie any longer, even if it means breaking a promise she made so long ago…

Fifteen-year-old Winny has never known a real home. After running away from an abusive stepfather, she falls in with Mary, Jack, and their ragtag group of friends roaming the streets of Liverpool. When the children are caught stealing food, Winny and Mary are left in Dr. Barnardo’s Barkingside Home for Girls, a local home for orphans and forgotten children found in the city’s slums. At Barkingside, Winny learns she will soon join other boys and girls in a faraway place called Canada, where families and better lives await them.

But Winny’s hopes are dashed when she is separated from her friends and sent to live with a family that has no use for another daughter. Instead, they have paid for an indentured servant to work on their farm. Faced with this harsh new reality, Winny clings to the belief that she will someday find her friends again.

Inspired by true events, The Forgotten Home Child is a moving and heartbreaking novel about place, belonging, and family—the one we make for ourselves and its enduring power to draw us home.” 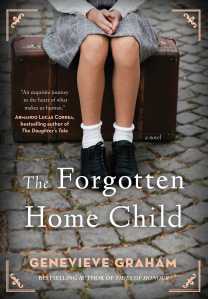 Review: I received an advanced copy of this book from the publisher (Simon and Schuster) through Net Galley in exchange for an honest review.

When I picked up this book, I honestly did not know what to expect. I had read the description of the book on Goodreads a few times, but I still didn’t understand what I was about to read. The Forgotten Home Child took me on a heartbreaking trip through a dark period of Canadian history that I knew nothing about. It opened my eyes to something I couldn’t imagine happening, and it’s made me want to do some more reading on the subject.

The Forgotten Home Child starts in the present day when Winny’s granddaughter and great-grandson start to ask her questions about their family’s history. Winny never planned on telling anyone about her tragic past, but she realizes that she has to tell her family the truth. The book then goes back to 1936, and we see Winny as a young girl living on the streets with Jack, Mary, Edward, and Cecil, her group of friends that became her family when she ran away from her abusive home at age fifteen. The book goes back and forth between Winny’s and Jack’s perspective as they experience the orphanage; Dr. Barnardo’s; Canada, where they suffer unimaginable abuse as Home Children; and their adult lives. The book periodically goes back to the present day, but the majority of it takes place in the past.

What made this book stand out to me was the characters. I thought that both Winny and Jack were incredibly brave, and I was impressed by the bit of optimism they had left, even though their past experiences gave them no reason to be optimistic. I thought both characters were clever, and my heart kept breaking for them with every tragedy they experienced. I also loved how determined they were to see their friends again and how they never stopped searching for each other.

I also loved how captivating this story was, and I had a hard time putting it down once I started reading. I wanted to know what happened next, I was rooting for the characters to overcome the latest obstacle thrown their way, and I was invested in their futures. I was especially drawn to Jack’s story because there was a bit more mystery around what he was going to end up doing and where his life would take him. I was also interested in Winny’s story, but since the present-day sections were told from her perspective, I had a bit more of an idea about how her life would unfold.

One thing I should note is that there are some scenes in this book that are difficult to read. The Home Children were abused by their mistresses and masters, and they were essentially indentured servants. Some of the things that happened, especially with Jack and the other boys, makes me shudder just to think about. I think this book is important for people to read because it brings light to such a dark and terrible period in Canada’s history, but it’s not easy to read about.

Overall, I’m very grateful that I read this book because, without it, I wouldn’t know about Home Children and all these terrible things that happened to them. I’m already planning on buying this book for a few of my friends because they like historical fiction, and I think that more people need to know about this dark period in Canadian history.

QOTD: Do you like pumpkin spice?
QOTD: What are you currently reading?
I meant to post this on Thursday, but the days seem to be jumping ahead on me 😅
QOTD: What books are you excited to read in August?
Hello everyone 👋
YA fantasy giveaway! Congratulations to Savannah J. Goins for the upcoming release of her latest novel, The Cathawyr, and hats off to @arcticpaintbrush for this incredibly gorgeous cover design! In celebration, we’re giving away a $25 Amazon gift card and $25 to Savannah’s merch store! The winner will be randomly drawn and notified on Friday!