ARC Review – What I Like About You by Marisa Kanter

Summary: From Goodreads: “Can a love triangle have only two people in it? Online, it can… but in the real world, it’s more complicated. In this debut novel Marisa Kanter explores what happens when internet friends turn into IRL crushes.

There are a million things that Halle Levitt likes about her online best friend, Nash.

He’s an incredibly talented graphic novelist. He loves books almost as much as she does. And she never has to deal with the awkwardness of seeing him in real life. They can talk about anything…

Except who she really is.

Because online, Halle isn’t Halle—she’s Kels, the enigmatically cool creator of One True Pastry, a YA book blog that pairs epic custom cupcakes with covers and reviews. Kels has everything Halle doesn’t: friends, a growing platform, tons of confidence, and Nash.

That is, until Halle arrives to spend senior year in Gramps’s small town and finds herself face-to-face with real, human, not-behind-a-screen Nash. Nash, who is somehow everywhere she goes—in her classes, at the bakery, even at synagogue.

Nash who has no idea she’s actually Kels.

If Halle tells him who she is, it will ruin the non-awkward magic of their digital friendship. Not telling him though, means it can never be anything more. Because while she starts to fall for Nash as Halle…he’s in love with Kels.” 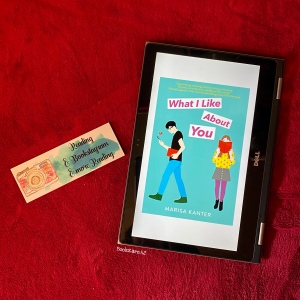 Review: I received an advanced copy of this book from Net Galley and the publisher (Simon and Schuster) in exchange for an honest review.

Halle has always liked books; her grandmother was a legend in the publishing world, and when Halle starts her book blog, One True Pastry, she goes by Kels because she wants to see if she can make it in the book world without relying on her grandmother’s name. Nash is a blogger, graphic novelist, and creator of the webcomic Rex. Kels and Nash are best friends online, they talk every day, and they plan on meeting each other face to face when they hopefully attend NYU in the fall. Then Halle moves in with her grandmother and runs into Nash at the library, in a moment of panic, she introduces herself as Halle, and things start spiralling from there.

My favourite thing about this book is that it dove into the world of book blogging, bookstagram, and book Twitter. I loved reading about the online world that I feel most comfortable in, and I was able to relate to Halle because I know and love the online book world. I loved that there was a side story of an author going rogue on Twitter and alienating her fans because that’s something that I hear and read about all the time. This is the first book I’ve read that featured this online world, and I thought it was neat to read about this world.

I also really liked the characters in this book. I liked how ambitious and awkward Halle was, even if her awkwardness was a bit stereotypical. I liked Nash and how hard he tried to be friends with Halle, even when she was acting weird and being pretty terrible to him. I liked Nash’s friends, especially Molly and Autumn, I loved how hard they were both working to achieve their goals, and I liked how easily they accepted Halle into the group.

Another thing that I liked about this book is that it deals with grief. Halle’s grandmother passed away, and her grandfather has been struggling ever since. When Halle and her brother move in with their grandfather, things are weird because he’s not the same. I liked that we got to see all three of these characters dealing with their grief differently because, in reality, everyone deals with grief in their own way.

One thing that annoyed me was how long it took Halle to tell Nash the truth about who she was. I understand that if she had been honest from the start, there wouldn’t have been much of a story, but I did get annoyed after a while. I also didn’t like how Kels started treating Nash as Halle and Nash started getting closer. I thought the whole situation got too messy, but I can also understand why Halle felt panicked and didn’t know how to tell him the truth.

Overall, I really enjoyed this book. I loved the characters, and I loved that it featured the book blogging world. I thought the premise of a love triangle with two people was unique, even if I got a bit annoyed with it in the end. I liked how ambitious the characters were, and I was incredibly happy for them when they achieved their goals.