5 On My TBR – Challenging Reads 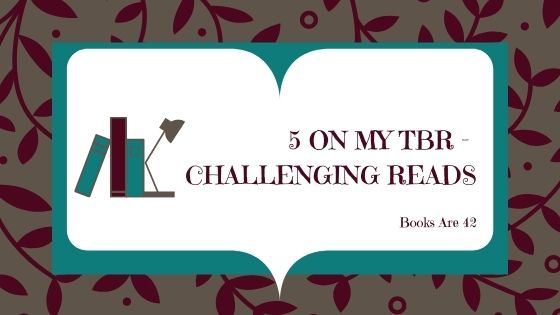 5 on my TBR is a weekly meme that’s hosted by Local Bee Hunter’s Nook. Each Monday, there’s a different prompt, and the goal is to list five books on your TBR that fit into the prompt.

This week’s 5 on my TBR prompt is Challenging Reads. I had difficulty deciding what I should write about for this prompt because I don’t have much interest in a lot of the challenging reads that come up when you google “challenging reads.” After a bit of thought, I decided that for this prompt, I would talk about some Classics that are on my TBR because I generally find Classics to be difficult to get into, even if some of them are considered “easy reads.”

Pride and Prejudice by Jane Austen – Even though romance is my favourite genre, the only Jane Austen book I’ve read is Northanger Abbey, which was for one of my classes at University. I have a set of Jane Austen books sitting on my shelf, but I haven’t been in the mood to try reading any of them. Of all of the books on this list, this is the one that I’m most looking forward to reading because I would like to become acquainted with Mr. Darcy.

Wuthering Heights by Emily Brontë – This is the only book on this list that I’ve tried reading before, and that was a long time ago. In High School, we had weekly rotating “drop everything and read” periods and one week, I brought Wuthering Heights with me. I don’t remember how far I made it, but I haven’t picked it up since. The only thing I know about this book is that there is a character named Heathcliff and that he was mentioned in Twilight. Hopefully, I’ll read this one eventually so I can learn a bit more about the plot.

Treasure Island by Robert Louis Stevenson – Like most of the books on this list, I have no idea what this one is about. I assume that it involves treasure and an island, but that’s about as much as I can figure out based on the title. This book is on my TBR because pirates are fun, and a quick Google search tells me that a lot of popular portrayals of pirates are based on this book. This book is also on my TBR because I’ve owned a copy of it since elementary school, which is a long time for a book to sit unread.

Jane Eyre by Charlotte Brontë – This is another book that I’ve heard a lot about, but I know almost nothing about it. I think this is the one with the person trapped in the attic, but I might be confusing it with another classic. This book is on my TBR because it comes up a lot when you ask people what their favourite classic is. I don’t know if I’m going to enjoy this book or any of the books on this list, for that matter, but I am curious enough to give it a try at some point.